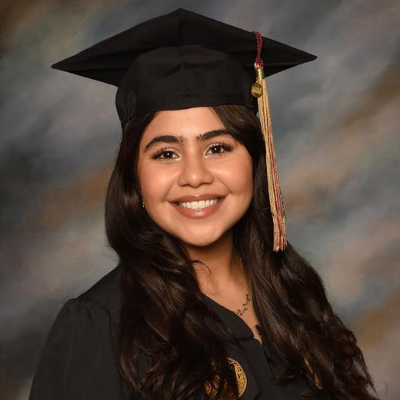 2021 College of Music and Media graduate Valeria Ali has been awarded a $73,000 grant to establish Al Día, a Spanish-language news service for the Greater New Orleans area. She also runs Imagen Marketing, an agency that provides affordable marketing services to immigrant-owned businesses.

A New Orleans native with family roots in Honduras and Syria, Ali first enrolled at Loyola University as a sociology student intending to eventually study law. After taking a career inventory test in the Student Success Center, though, she chose to pursue a degree in marketing and communication instead. Ali says the wisdom of this choice became clear right away when she was hired as a part-time social media coordinator for a local investment firm.

Ali participated in Loyola's study abroad program in her junior year. "Studying in Barcelona leveled me up in so many ways," says Ali. "Emotionally, mentally, spiritually, and professionally—I just grew so much." The experience inspired her to expand her work with the New Orleans immigrant community when she returned to Loyola, and so Imagen Marketing was born. “Felipe Massa, my entrepreneurship professor, gave me so much knowledge on how to get an idea to come to life,” says Ali.

As Ali looks ahead to the bright future of Imagen and Al Día, she credits her faith in God for helping her get this far. “This goes for everything in life: If you do it with faith, if you do it with love, if you do it with all the determination and motivation in your heart, life will give it back to you ten-fold.”