Loyola University New Orleans proudly announces two Outstanding Seniors who received the university’s 2019 Ignatian Award, Loyola’s highest award for students. Ignatian Award winners have distinguished themselves by their holistic involvement in the life of the university — representing Loyola with honor and distinction, maintaining a distinguished grade point average, living a strong faith commitment, demonstrating examples of service for and with others, and showing high regard for Ignatian, Jesuit values. 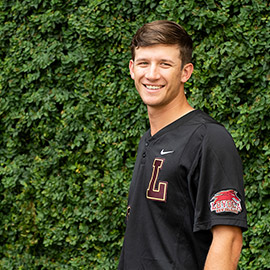 Outstanding senior Charlie Seiter ’19, graduated magna cum laude Saturday, May 11, with a double major in Finance and Economics, and a double minor in Spanish and Catholic Studies. An Honors student and member of the Wolf Pack Baseball team, Charlie participated in a wide variety of extracurricular activities while at Loyola, joining Wolf Pack immersion trips to Ecuador and Belize, serving as a facilitator in the Christian Life Community, helping to run the Loyola Catholic Men’s Fellowship, holding office in the Wolf Pack for Life organization, and serving as Eucharistic Minister and dedicated member of the university’s 9 p.m. Mass Community, among other activities. Even his academics contribute to his faith – Charlie wrote his Seniors Honors Thesis on Catholic Economics, a tricky topic.

A true leader, Charlie worked to better the campus and field life of student-athletes as a member of the Student-Athlete Advisory Committee. On the field, he showed a fierce commitment to his sport and to his team.  A former Congressional Aide in Washington, D.C. he has been recognized for his scholarly and athletic accomplishments while at Loyola as a recipient of the university’s Presidential Scholarship; the Jesuit Identity Scholarship; an Athletic Scholarship for baseball; the Northwestern Mutual/Hornsby Agency Scholarship; various athletic scholarships and membership in Alpha Sigma Nu, the Jesuit Honor Society.

“When not engaging in his faith life or playing ball on the field,” says Wolf Pack for Life leader and Loyola student Alex Christian Lucas,” he can be found advocating for social justice or honing his understanding of his faith.” 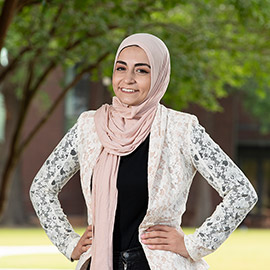 Outstanding senior Rula Thabata ’19, a native of New Orleans’ West Bank and graduate of John Ehret High School, graduated magna cum laude Saturday with a Bachelor of Arts in Political Science and a double minor in Sociology and Middle East Peace Studies. As a Loyola Ignacio Volunteer, she traveled as far as South Africa to feed the homeless, advocate for gun control in Baltimore and Washington, D.C. and as close as Austin to take part in a bioethics competition. Her second year at Loyola, Rula was the sole woman from the community to take part in the first-ever National Muslim Women’s Summit at Harvard’s Kennedy School of Government. The following year, as an organizer, she brought six women from her own community.

An outstanding student, Rula has been part of the Women’s Resource Center at Loyola, helping to develop campus programming and advocating for women on campus, in the nation and around the globe. Committed to diversity and equity, she has been part of the Diversity, Equity and Inclusion committee for two years. As president of many organizations this year, including Women in Politics and Loyola Society for Civic Engagement, and as the co-director of the WRC’s programming team, she developed unique visions and serves as the spine of the groups by ensuring that all programs and projects are meticulously executed.

“To advocate for others has been the most important factor of Rula’s university experience,” says friend Razan Badr. “Her freshman year she collaborated with other students to create a list of demands from the students to make sure everyone’s voice was being heard. She let those in her community see the importance of the power of women, and became an inspiration not just for me, but for women in our community. She showed me the power of making oneself uncomfortable for the sake of freedom and growth.”