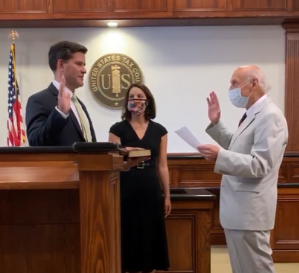 The Honorable Christian Weiler, J.D. ’05 was sworn in as Judge on the U.S. Federal Tax Court on September 9th of this year.

A New Orleans native, Weiler earned an undergraduate degree in accounting from Louisiana State University before enrolling in Loyola’s College of Law in 2001. After he completed several courses in tax law, Weiler’s law professors encouraged him to pursue an LL.M. in tax law in addition to his juris doctorate. After completing his law studies in 2005, Weiler practiced at Weiler & Rees in New Orleans for 15 years, specializing in tax and estate planning matters. At Weiler & Rees, he represented a range of clients—from individuals and small businesses, to local and State tax assessors.

“Serving as a judge on the Tax Court is both rewarding and challenging,” says Weiler. “As a tax judge, you get to consider and decide some of the most cutting-edge tax disputes; however, you also regularly hear small pro-se taxpayer disputes with the IRS. The Tax Court serves an important role, since it’s the only prepayment forum in which a taxpayer can challenge his or her IRS tax assessment.”

Weiler and his family are relocating to Washington, D.C., where he will serve a term of 15 years on the Court. He values his time at the College of Law—crediting Professor William Neilson with sparking his interest in tax law—and remains close friends with a number of his fellow College of Law classmates to this day.