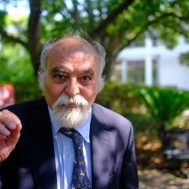 END_OF_DOCUMENT_TOKEN_TO_BE_REPLACED

Behrooz Moazami is Patrick G. O’ Keefe Distinguished Professor of History at Loyola University New Orleans. He is the founder and Director of the Middle East Peace Studies program. Dr. Moazami joined Loyola's History Department in 2007 and initiated the annual Loyola University Students Peace Conference in 2008. Previously he taught at several universities, including the New School for Social Research, the City College of New York, New York University, Pace University, Tulane University, and Long Island University. Moazami was promoted to the rank of Professor in 2019.

For more than two decades before joining academia, Moazami was a professional political activist and contributed to a number of Iranian dissident publications. He co-founded and co-edited Andisheye Rahai a Persian review on politics, theory, and society while living in Paris in exile (1983-1992).

His book State, Religion, and Revolution, 1796 to the Present (Palgrave-MacMillan, New York, London, 2013) challenges basic assumptions about recent Iranian history and constructs a new synthesis of the history of state and religion in Iran from 1796 to the present. Arguing that the 1979 revolution has not ended, he relates political and religious transformations in Iran to the larger instability of the Middle East region and concludes that turmoil will continue until a new regional configuration evolves.

The book with a new introduction has been translated into Turkish, Iran'da Devlet, Din ve Devrim; 1796'dan Bugüne (Iletisim Yayinlari, Istanbul, Turkey 2018).  Also, The Arab Institute for Research and Publishing (housed in Beirut and Oman) will publish the book in Arabic (Spring 2021).

Currently in his sabbatical year (2020-2021), Dr. Moazami is simultaneously working on two different projects in Persian: working on a brief history of the Iranian left from the late 1960s to the 1979 revolution (a collective and lengthy undertaking in Persian where he is the principal researcher and writer), and publishing a collection of his previous articles in a book format. All the while he continues to dream about and plan to promote peace and democracy in the Middle East.

Dr. Moazami is a Trustee of the Ardeshir Mohassess Trust formed to preserve the legacy of the artist and to help other gravely ill artists in need. Moazami, as a friend of late Ardeshir and a Trustee, has helped organize an academic conference and an exhibition at NYU (2010), facilitated production of the documentary, Ardeshir Mohassess: The Rebellious Artist, an IFVC Production, New York (2013), and an exhibition at Art Dubai (2014). He is planning to have a solo exhibition of Mohassess artworks in New Orleans in the Fall of 2021.

"The Islamization of Social Movements and the Revolution in Iran, 1963-1979," Comparative Studies of South Asia, Africa and the Middle East (CSSAAME), Special Issue on the 30th Anniversary of the Iranian Revolution, Volume 29, Issue 1, 47-62: Duke University Press. (2009)