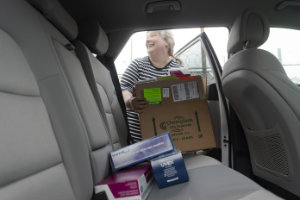 This weekend, Loyola senior Baasel Syed read online that Tulane Medical Center and other hospitals in the greater New Orleans area are collecting personal protective equipment for front-line health care workers. A biophysics and pre-med major, he had three pairs of safety goggles and two face shields at home in his closet – and knew that Loyola keeps spares on hand for researchers and students.

Baasel also had friends and family on his mind. New York just enacted changes allowing early medical school graduations and licensing changes to help in the fight against COVID-19 ─ Louisiana and other states could soon follow suit. His own sister, Sidrah, who is a fourth-year medical student at LSU, could be joining the front lines.

"It shifted me from thinking 'I should do something' to 'I've got to do something,’” he said.

Already, Baasel had reached out to University Medical Center about donations on behalf of a friend sewing homemade medical masks for healthcare workers. Originally, UMC declined his offer. But on Saturday, they got back to him. They could use the lab equipment ─ and expressed dire need.

So Baasel, a New Orleans native who also graduated from Jesuit High School New Orleans, reached out to Loyola faculty - and to faculty from neighboring UNO, Xavier, and Tulane universities to see whether some of the equipment in now-dormant university laboratories could immediately be put to use.

Not only did Loyola decide to give, but everyone he contacted at other universities said they would give too. Many told him to “keep up the good fight.” 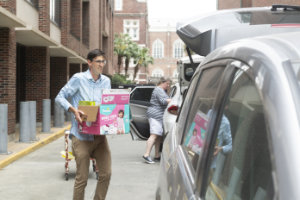 It all started with an email from Baasel, said Dr. Martin McHugh, a physics professor who contacted all natural science department chairs and over the weekend they organized the equipment drive.

“I’m just grateful to know that we’ve done something to help,” said Baasel. “With Coronavirus, people have felt very powerless between senior year being cut short and being stuck at home not able to go anywhere. At least there’s one thing I can say that I helped to do or put in motion.”

The reality is that he is already making other plans.

Baasel, who spent last semester studying at the Beijing Center, the only Jesuit center of higher learning in mainland China, understands the key roles that manufacturing, healthcare infrastructure and China’s surge response to public health crises played in helping the dense nation conquer COVID-19 in such a short time.

He’s reached out to John Seefeldt, chair of the art and design department at Loyola, and area partners about collaborating to manufacture safety goggles and face shields using the university’s state-of-the-art 3-D printers.

He’s staying safe, he said, and keeping up the good fight.