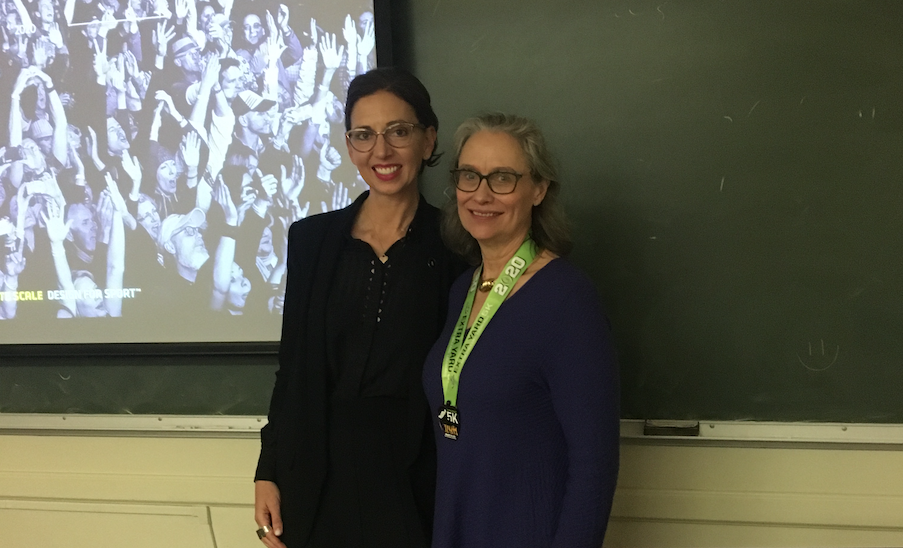 Alumna Molly Mazzolini, class of 1998, stopped by the School of Communication & Design's Public Relations class to talk about her career in sports branding ahead of the championship game between Louisiana State University and Clemson University.

Her company Infinite Scale is responsible for the look and décor for the 2020 College Football Playoff National Championship Game. Mazzolini spoke to the importance of design during her guest lecture, telling students it took 10 months to plan for the overall "look" of the game. Mazzolini's company creates comprehensive wayfinding and decor/signage for everything from bus wraps, lobbies of the team hotels, exterior of team locker rooms, airport signage, street banners, and the changeouts at the end of the game when trophy is awarded to maximize the fan experience and to create great broadcast shots for television. The design had to be created and pitched even before the two teams made it to the finals. From there they created a brand identity that would suit the game's location. For New Orleans, her team settled on "mist."

"Sports brings people together" Mazzolini said, noting that sports are one of our few universal languages.

Mazzolini has worked and played in the sports industry for over 20 years. Her career path includes summer (1996) and winter (2002) Olympic Games. It was during the 2002 Olympic Winter Games where The Creative Council™, a collaborative approach to providing creative consultation to Clients, was first implemented. Mazzolini set up a brand-management department that worked closely with 70+ sponsors and suppliers of the U.S. Olympic Movement. Prior to that she was at the University of Kentucky Athletics Department specializing in media relations as a liaison between coaches and the media. Her company has created the look and design for a number of new and remodeled national league sports arenas. Mazzolini told the PR students that she formed Infinite Space when she was 28 years old.