Instructor of Flute and Piccolo 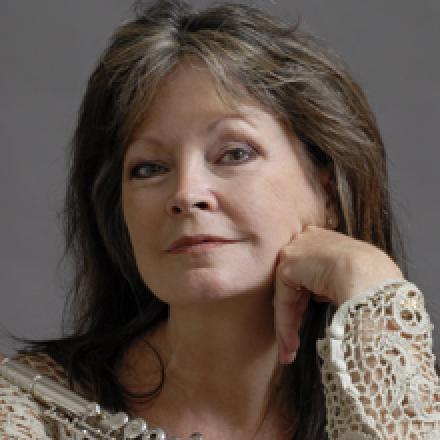 END_OF_DOCUMENT_TOKEN_TO_BE_REPLACED

She has been a frequent concerto soloist with the Louisiana Philharmonic Orchestra, most recently performing the Liebermann Piccolo Concerto. In addition to her musical duties with the LPO, Patti played an active role in the start-up period of the orchestra, serving as Director of Marketing for four seasons. She continues to participate in the governance of the LPO, having served as a member of its Board of Trustees, an honorary member of the Symphony Volunteers and was President of the Orchestra for the 1999-2000 and
2006-2007 seasons.

Patti is immediate past Chair of the Board of Directors of the National Flute Assocation and, in 1997, produced and hosted the NFA's 25th anniversary convention in Chicago, attended by over 4000 flutists from around the world. She has performed at numerous NFA conventions including New York, Orlando, Boston, St. Louis, New Orleans, Kansas City, and Albuquerque and was featured as the cover story of the February 2004 Flute Talk magazine.

She is on the faculty of Loyola University and maintains a busy performing schedule, presenting recitals and masterclasses throughout the country. She has appeared as guest artist at numerous flute festivals around the country including those in Chicago, Washington, D.C., Atlanta, and Raleigh, NC and has presented masterclasses at Rice, University of Michigan, Ohio State University and others. Her major teachers include Julius Baker and Everett Timm.
She performed in masterclasses with Jean-Pierre Rampal, Maxence Larrieu, Sam Baron and William Bennett. She was a finalist in the Geneva and Naumburg Flute Competitions and a prize winner in the Charleston Symphony and National Flute Association's Young Artist Competitions.

She was a member of the Community Advisory Board of WWNO radio for fifteen years and is currently a member of the Classical Arts Award Committee for Gambit Weekly. Since 1984, she has coordinated chamber music activities for the acclaimed Windsor Court Hotel and performed during Afternoon Tea.

Patti is an award-winning professional artist, painting in oils and water based media. She is the director of the Garden District Gallery and is a signature member of the Louisiana Watercolor Society. She also studies at the New Orleans Academy of Fine Art, where she is a student of Auseklis Ozols. She was the Rex Proclaimation artist for 2008, designed and produced the artwork for the 2009 Hermes and Athenians invitations, and the 2006 Windsor Court Christmas card. As a calligrapher, her work has appeared in Bon Appetit, Southern Living and Victoria magazines, at Mardi Gras for the Pickwick Club and throughout the Windsor Court Hotel.

She spends the month of August in Colorado with her husband, LPO timpanist Jim Atwood, in their tiny mountaintop cabin with their very large Old English Sheepdog, Gracie.