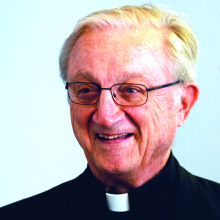 END_OF_DOCUMENT_TOKEN_TO_BE_REPLACED

Ph.D., The Catholic University of America, 1956

Father Jim Carter, S. J. is President Emeritus, following his service as the longest tenured president of Loyola University, serving for over 21 years.  His career at Loyola spans more than 45 years and he recognized as a theologian, scientist and civic leader.

Carter received his Ph.D. from The Catholic University of America.  He also holds a bachelor's degree in physics from Spring Hill College, a master's degree from Fordham University and a S.T.L. from Woodstock College. His field of research is nuclear and elementary particle theories. He has published many articles in the fields of nuclear physics and in theology.

Reflecting a varied career, Carter has received numerous honors and awards. In 1974, he received the Palmes Academiques, and the same year, as an alumnus of St. Stanislaus High School in Bay St. Louis, Mississippi, he was elected to the school's Hall of Fame. Carter has been honored with the Anti-Defamation League of B'nai Brith's Torch of Liberty Award in 1983. In 1994, he received the Whitney M. Young Award, presented by the Urban League. Loyola presented Carter an Honorary Doctorate in 1995.

As a civic activist, he has served as division director of the United Way, a director at New Orleans Public Service, Inc., and as president of the Metropolitan Area Committee. Carter served as Interim Executive Director of the Association of Jesuit Colleges and Universities in 1996 and as co-chair of the New Orleans region of the board of the National Conference for Community and Justice.

Carter has a long personal history at Loyola. He came to the university first as a student in 1944. He returned in 1960 to teach physics as an instructor, later becoming an assistant and associate professor of physics. He was appointed provost and academic vice president in 1970 and in 1974, was named the fourteenth president of university.

After serving the university for the longest period of any previous Loyola president, Carter announced his retirement in the summer of 1994.  He made the transition on August 1, 1995, into the newly created position of chancellor, then left Loyola when he was named pastor of Immaculate Conception Church in 2001.  He soon returned to Loyola where he continues teaching a course on science and religion at Loyola, one of the most popular courses at the university.