Scholar in Residence and Spiritual Director at Notre Dame Seminary 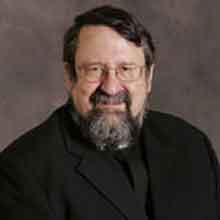 END_OF_DOCUMENT_TOKEN_TO_BE_REPLACED

Ph.D. in religious studies (systematic theology with an emphasis in Christian origins)

Father Muller was born in  Columbia, S.C. and entered the Jesuits in 1965 and received his undergraduate degree at Spring Hill College in Mobile, AL (BS in physics and philosophy).  For regenecy, he taught physics and mathematics at Jesuit High School in Tampa, FL and then studied theology at Regis College in Toronto, and continued on for his Ph.D. in religious studies (systematic theology with an emphsis in Christian origins) at Marquette University in 1987 and received the Arthur J. Schmitt Fellowship, 1979-1981 for that purpose.  His dissertation was entitled, Trinity and Marriage in Paul:  Theological Shape as Ground for a Scriptural Warrant for a Communitarian Analogy of the Trinity.

He joined the faculty of Marquette University and while at Marquette he was a co-organizer for two national conferences on Augustine and on Theological Education in the Catholic Tradition.   He was asked to join the faculty of the Gregorian University in Rome, and later joined the faculty of Sacred Heart Major Seminary in Detroit, MI (as the Bishop Kevin M. Britt Chair in Dogmatic Theology—Christology), serving as a teacher and spiritual director.  He was awarded “Second Place, Best feature article—Scholarly” by the Catholic Press Association of the United States and Canada, 2004 Press Award for “The Magisterium and Human Origins,” National Catholic Bioethics Quarterly 3 (2003):501-15.  He then went to Kenrick-Glennon Seminary in St. Louis, MO where he served primarily in spiritual direction.

In addition to these more academic activities he has over the years led retreats, given parish talks, helped run a Confirmation program, critiqued manuscripts (once for then Bishop Francis George).  He has also been, off and on, very active in the Catholic Charismatic Renewal, leading prayer groups in the late 1960s and early 1970s.  More recently he has participated in Renewal Ministries (Ann Arbor, Michigan) mission teams to Tanzania, some eight times since 2006, primarily charged with conducting mini-retreats for priests and other talks given at workshops and rallies.  In October of 2017 he became the secretary then treasurer for the international Federation of Seminary Spiritual Directors.