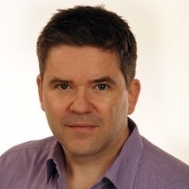 END_OF_DOCUMENT_TOKEN_TO_BE_REPLACED

Dittmar Dittrich joined the faculty at Loyola University in 2005 and has developed diverse courses in the areas of languages and cultures, religious studies and philosophy. He is currently teaching German in the Department of Languages and Cultures and, in 2010 and 2012, he served as the on-site director for Loyola University's Summer Program in Ávila, Spain. Dr. Dittrich holds an M.A. from Tulane University (1995) and a doctorate from the Universität Hamburg, Germany, (2003), both in philosophy. His primary area of expertise is European philosophy, with a focus on 17th and 19th century thought.

From 2012 to 2013, Dr. Dittrich served as the director of Loyola's Film Buffs Institute and, over the last several years, he has designed various courses on philosophical and cultural aspects of contemporary films. He has collaborated with the New Orleans Film Society on many occasions and his First Year Seminar “The Meaning of Life” included field trips to the New Orleans Film Festival 2014. Dr. Dittrich has organized numerous film events and festivals on Loyola's campus and has repeatedly hosted visits by local, national and international film directors and actors.