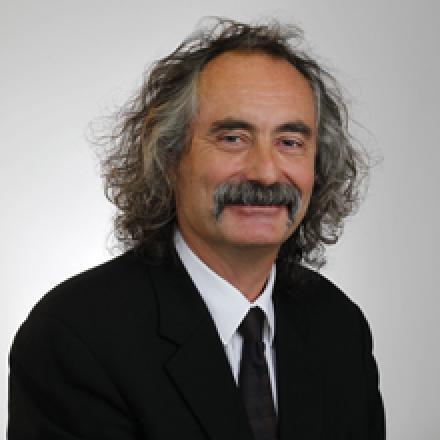 END_OF_DOCUMENT_TOKEN_TO_BE_REPLACED

Sanford Hinderlie has been a member of the music faculty at Loyola University New Orleans since 1981. As a professor of music, he works with students in the College of Music and Fine Arts, where he teaches contemporary music, music technology, and music industry studies.

An accomplished jazz pianist and electronic composer, Hinderlie has toured extensively and performed concerts and festivals in Asia, the former Soviet Union, Georgia, Armenia, the Middle East, Europe, and throughout the United States. As a visiting professor, he has taught at the Jesuit Elisabeth Conservatory in Hiroshima, Japan, on several excursions. He has produced over thirty recordings of New Orleans jazz and R&B artists on his own label, STR Digital Records, including three of his own original works.

In 2012, Hinderlie was one of only twenty-five (25) university faculty members from around the world invited to present at the London Education Research Symposium, held at the Oxford and Cambridge Club in London. He spoke on “Pedagogical Innovations of Online Courses at Traditional Universities.” Sandy was also an invited guest at the French-language annual FAMEQ Conference, themed “Music Learning: Benefits for the 21st Century Learner Conference” and held in Quebec City, Montreal.

Hinderlie is a member of seven professional societies, including the College Music Society (Board Member of the Music Industry), Association for Technology in Music Instruction, the International Computer Music Association, Society of Electro-Acoustic Music United States, National Academy of Recording Arts and Sciences, and The Louis Moreau Gottschalk Society based in Holland. Sandy has served as principal investigator or co-principal investigator for several successful enhancement grants from the State of Louisiana Board of Regents. Since 2015, Sandy has served as director of the new Popular & Commercial Music (BS) degree program at Loyola.