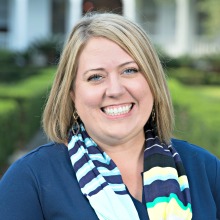 END_OF_DOCUMENT_TOKEN_TO_BE_REPLACED

Laurie Eichelberger Leiva joined the Office of Alumni Relations in September, 2011. Laurie assumed the role as director in February 2014. As the Director of Alumni Engagement Laurie is responsible for the organization, initiation, and supervision of all aspects of the university's alumni engagement efforts to include alumni programs and events, annual appeal campaigns, direct mail solicitation, email campaigns, and phontahon.