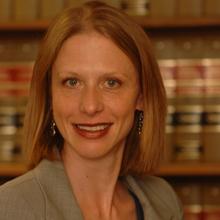 END_OF_DOCUMENT_TOKEN_TO_BE_REPLACED

B.A. 1997, University of Texas at Austin (with highest honors)

Karen Sokol joined the Loyola University New Orleans College of Law faculty in 2009. For the 2022-23 academic year, she is serving as a Fellow of Law, Ethics, and Public Policy at the Princeton School of Public and International Affairs. Her research and teaching interests include international law, climate law and policy, national security and foreign relations law, constitutional law, and administrative law.

She is an associate scholar with the Amsterdam Centre for Climate Change and the Law; a member of the Climate Accountability Working Group of the Climate Social Science Network; a member of the Global Network for Human Rights and the Environment; and a member scholar of the Center for Progressive Reform. She spent the spring and summer of 2018 researching in India, supported by a Fulbright award. Her academic work has appeared in publications such as the Washington Law Review, the American Journal of International Law, the Yearbook of International Law and Jurisprudence, Washington Law Review, the Yearbook of International Disaster Law, and Oxford University Press. She also regularly contributes commentary in various outlets, including Slate, The Hill, and Bloomberg Law. She has been widely quoted in the press about global climate litigation and other climate-related matters, including in the BBC, NPR, Reuters, The Guardian, The Washington Post, CNN, PBS Frontline, and Fortune.

Professor Sokol graduated from Yale Law School, where she served as Articles Editor for the Yale Human Rights and Development Law Journal and was a member of the Allard K. Lowenstein International Human Rights Clinic. After law school, she clerked for Judge Carolyn Dineen King of the United States Court of Appeals for the Fifth Circuit and worked as an associate in the appellate section of Vinson & Elkins, LLP. She then worked as a policy analyst for the Center for Progressive Reform and as a fellow at Georgetown University Law Center’s O’Neill Institute for National and Global Health Law. View her publications.