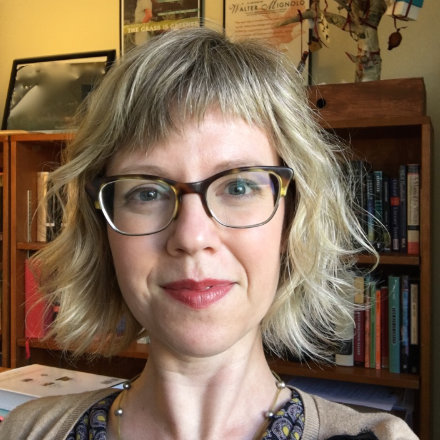 END_OF_DOCUMENT_TOKEN_TO_BE_REPLACED

Hillary Eklund specializes in English Renaissance literature in a transatlantic context and colonial American literature in English and Spanish. She is also interested in critical approaches to food, ecology, and the history of the book. Prof. Eklund is the author of Literature and Moral Economy in the Early Modern Atlantic: Elegant Sufficiencies (Routledge, 2015), editor of Ground-Work: English Renaissance Literature and Soil Science (Penn State University Press, 2017), and co-editor, with Wendy Beth Hyman, of Shakespeare and the Pedagogies of Justice: Why Teaching Renaissance Literature Matters Now (under review, Edinburgh University Press). Her current project, The Unfast Imagination: Reading Early Modern Wetlands, describes how wetlands, often perceived as nature’s “mistakes,” both compel and elude human designs, demonstrating a series of “unfast” countermoves to the fast violence of colonial incursion and technological imposition, and to the slow violence of ecological manipulation and resource expropriation. In addition to these books, she has essays published or forthcoming in journals such as Shakespeare Studies and SEL and in essay collections on a variety of topics. In the English department, Prof. Eklund teaches courses on Shakespeare, Renaissance literature, literature and environment, early American literature, and writing. She is also involved in Latin American and Caribbean Studies and the Program in the Environment.