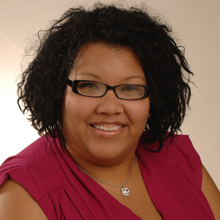 END_OF_DOCUMENT_TOKEN_TO_BE_REPLACED

Heather is the University Minister for Social Justice and Immersion Programs.

Heather Malveaux grew up on the Westbank of New Orleans in Marrero, LA. She started her college career at Xavier University of New Orleans and transferred to Loyola her senior year majoring in political science and graduating in 2007. While at Loyola, she became an Ignacio Volunteer, fell in love with the program and has been to Kingston three times as student and staff.

In 2009, she pursued a dual master’s degree in Little Rock, AR at the Clinton School of Public Service (Master of Public Service) and the University of Arkansas for Medical Sciences (Master of Public Health). She concluded her studies in 2012 after completing projects for the Fay W. Boozman Office of Community Based Public Health, the Arkansas Minority Health Commission and the Soul City Institute of Health & Development Communication in Johannesburg, South Africa.

During her spare time, she serves on the Clinton School of Public Service Alumni Board, is a CAP guide for the Young Leadership Council’s (YLC) College Admissions Project (CAP) and cheers on her favorite football team, the New Orleans Saints!