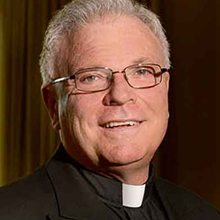 END_OF_DOCUMENT_TOKEN_TO_BE_REPLACED

Michael J. Garanzini, S.J. (born September 24, 1948 in Saint Louis, Missouri) is a priest of the Society of Jesus. From 2001 until 2015, Garanzini served as the twenty-third President of Loyola University Chicago in Chicago, Illinois.

Fr. Garanzini graduated from Saint Louis University with a Bachelor of Arts in Psychology in 1971, the same year that he entered the Society of Jesus. After spending years around the country and in Rome during his training and early years as a Jesuit, Garanzini received a doctorate in psychology and religion in 1986 from the Graduate Theological Union and the University of California, Berkeley. Later that year, he returned to Saint Louis University, teaching as an associate professor of psychology and later serving as academic vice president. Garanzini has taught at Regis University, Fordham University and the Gregorian University in Rome. After ten years at St. Louis University, he became assistant to the president of Georgetown University and Georgetown University until his presidency at Loyola. After stepping down from the presidency at LUC in 2014, he became its Chancellor. In 2012, he was appointed Secretary for Higher Education for the 200 Jesuit post-seccondary institutions globally, a post he still holds.  He is currently president of the Association of Jesuit Colleges and Universities.

Garanzini is the author of The Attachment Cycle: An Object Relations Approach to the Healing Ministries (1988), Meeting the Needs of Dysfunctional Families (1993), Child-Centered Schools: An Educator's Guide to Family Dysfunction (1995), and articles in numerous journals. He has served on several boards of trustees of Jesuit universities including Loyola New Orleans, Rockhurst, USF, Fordham, Fairfield, St. Louis University, and Loyola Marymount in LA.  He is currently president of the Association of Jesuit Colleges and Universities.