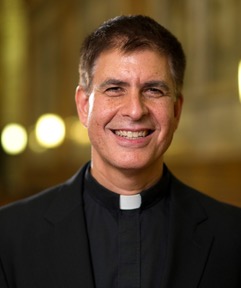 END_OF_DOCUMENT_TOKEN_TO_BE_REPLACED

John J. Cecero, S.J. is Vice President for Mission Integration and Ministry and Associate Professor of Psychology at Fordham University. Previously, he served as Jesuit Provincial of the USA Northeast Province. In his current role at Fordham, Fr. Cecero assumes responsibility for the advancement of its Jesuit and Catholic mission, collaborating closely with leaders across all units of the university.

A native of Philadelphia, PA, Fr. Cecero entered the Society of Jesus immediately following graduation from St. Joseph’s Prep. He received an Honors Bachelor of Arts degree in French and Philosophy from Gonzaga University (Spokane, WA) in May 1982, followed by Master of Divinity (1988) and Master of Theology (1989) degrees from the Weston Jesuit School of Theology (now Boston College School of Theology and Ministry).  He was ordained to the priesthood on June 10, 1989.

Fr. Cecero then pursued doctoral studies in clinical psychology at The George Washington University in Washington, D.C., and at the completion of a one-year clinical internship at the Boston VA Hospital, he was awarded the Ph.D. in 1996. Following a two-year postdoctoral research fellowship in substance abuse treatments at Yale University’s Department of Psychiatry, he came to Fordham as a professor, rector of the Fordham Jesuit Community (2007-2013) and member of the Fordham Board of Trustees (2008-2014) on which he chaired the Mission and Identity Committee.

In addition to maintaining a part-time psychotherapy practice, he has given numerous workshops and presentations on spirituality, mental health, and inspirational leadership to clergy and religious. He has published widely around lifetrap theory and practice, and he is the author of Praying Through Our Lifetraps: A Psycho-Spiritual Path to Freedom, a book-length guide published in 2002 by Resurrection Press.  He is also the author of a series of audio presentations that were produced in 2009 under the title Spirituality, Psychology and Virtue: A Catholic’s Guide to a Flourishing Life.